Coming here to Montreal for me was a huge step, both in terms for my professional career and my personal comfort zone limits. Though I can definitely say, even though I’ve been here for less than a week, it was the right decision. For this first blog entry I’m going to tell you both why I think this, and I’m also going to give out some information that I feel is important or useful for a student who is considering coming to this beautiful city to know. I believe it’s important to share my experiences here so others who are thinking of coming to Montreal may benefit from whatever knowledge I’ve gathered on this adventure. So without further ado, here is a rundown of what your first week here in Montreal may look like:

I came here to Montreal by car, so packing took a couple of days. It is suggested that you pack light, though “packing light” may have different meanings to different people. Basically, bring your bare necessities, then your comforts that you would normally have at home or in your dorm, then maybe only a few extra things that can be considered luxuries. 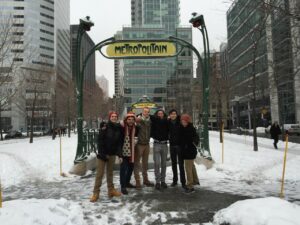 Remember that Montreal is a big city, and a unique one at that, with lots of places to shop, eat, etc. So remember that you’re probably going to want to buy things here, and you want to have enough room to take everything back with you when it’s time to return home. I can also tell you right now that when you cross the border, you’re going to know it. The overall crossing was incredibly easy. We just showed our suggested documents, our passports, answered a few security-related questions, and that was it! But as soon as we were on the other side, it already felt like a different place. For me, it was because the land was completely flat. As a natural born Vermonter who has lived there all her life, this was definitely a distinct visual change. There was probably only one “mountain” that was visible for the rest of the trip. When entering the actual city, we were pleasantly surprised that the drive through the streets was rather easy. Once we parked on the side street next to the residence hall, it was time to grab everything we could and head into the building (with our RA’s help of course).

Next stop was a room next to the front desk, where we stopped to pick up my apartment keys and an welcome package. The most useful was of course the folder with our class schedule, what the rest of orientation would look like, great places to eat, etc. We also were given a bag of tourist information, filled with mini books and brochures. Once everything was in my new room, I went out with my parents to lunch.

Directly down the street a short walk away from the residence (even for it being winter time in Montreal; yes, it is cold), we found ourselves on St. Catherine Street; a name which you will probably hear a lot. We went inside the Complexe Desjardins, a huge shopping mall with quite a variety of choices to both eat and shop. We went straight for the touch screen map straight ahead, where we could choose what food we were in the mood for and it would tell us where to go. Though I wasn’t half as interested in picking which food I wanted as I was the amazing water show display located right in the center of the mall on the first floor. As the jets shot up they very nearly touched the ceiling of the 3 or 4 story atrium. After our meal at one of the many shops in the mall, it was time to head back to the residence and say goodbye to the family. After about an hour later, orientation officially began.

Now one thing to keep in mind, you’re going to be doing a lot during orientation. There is going to be a lot of walking involved, no matter if it’s the fall or spring semester, so be sure to wear good shoes, and if you’re going in the spring semester, wear warm boots that are comfortable to walk in along with a good winter jacket (hats and gloves are also essential). During those first 3 days of orientation weekend, you will experience 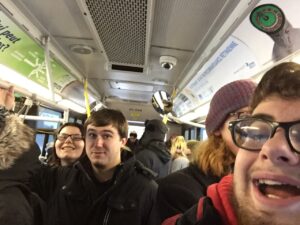 everything from eating with your whole abroad group more than once, to going on a scavenger hunt around the city, taking the metro, being given tours, and everything in between. You will have a few hours of downtime but that is about all. One thing I can assure you is that you will have lots of fun exploring with your friends. Everything and anything you could want is within walking distance, and you can take the metro to get from here to there a little faster. Do not be afraid to go out and look around to mark down some of your preferred spots, because chances are you are going to find many, even during your first few days.

Everywhere you go is nothing short of fantastic. That being said, take time out of your first week to start getting comfortable with your surroundings. Set a schedule for when you would prefer to work and when you would prefer to go explore. Even as a game artist, I can tell you that you will get some work during your first week, but not a lot. So get acquainted with the places you need to know (such as the closest bank, or Provigo, which is probably the best and closest option for grocery shopping). Grab a friend, look around, and I promise you will not regret it!