La Banquise is the most popular poutine establishment in Montreal. Located on 994 Rachel St. Featuring 30 different types of poutine, the 47 year old restaurant often sees lines out around the corner. Open 24/7, La Banquise remains busy at all hours of the day.

For those of you who have no idea what I’m talking about, poutine is a Quebec food invention, bringing together French fries, cheese curds, and gravy into one dish that has become insanely popular in Quebec, Canada, and even some parts of the US!

I was lucky enough to go to La Banquise for my second time with my Montreal Food Writing class. The first time I went I got the Reggae, which has ground beef, guacamole, diced tomatoes, and hot peppers, on top of the regular poutine ingredients. It was an amazing meal like none other I’ve had, but I was so ridiculously full afterwards I feel like I might have overdone it. This time I planned to try and eat a bit less in terms of volume, and try to savor the food more.

For our class we got five different poutines to try from, so we could each sample different ones. The five were:

My personal favorite was the Kamikaze, being the spiciest thing I’ve tasted since being in Montreal. I wasn’t a huge fan of the Folie, I’m not really sure why but I guess maybe there was just too much going on in the dish with too many ingredients, but it was still poutine so it was worth trying.

Our class was privileged enough to receive a tour of the kitchen. It was surprising that a restaurant with so much traffic operated out of such a small space. Alternatively, the gravy tub and potato stockpiles were huge 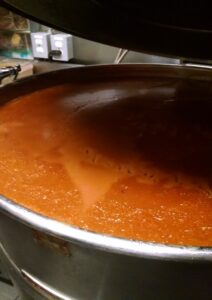 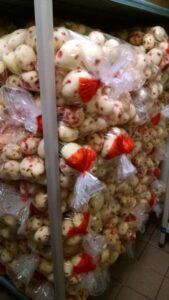 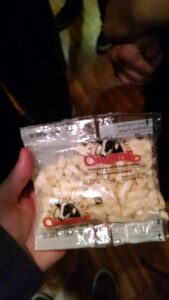 La Banquise buys all of their cheese curds in packages from a local cheese shop who make sure the cheese is “squeaky” when you bite it because that is just the way poutine cheese curds are supposed to be, according to expert poutine connoisseurs.

For anyone visiting Montreal who wants to try poutine, La Banquise is the place to go. If you come during common meal hours, especially on a weekend, expect to have a bit of a wait.

For more information you can go to https://labanquise.com/en/.