Why is it so hard to talk to people? A lot of my writing is about trying to talk to people. A few weeks ago it was a record shop, farther back it was a demo night. It’s something I struggle with, something I want to improve. I had high hopes for Montreal. It was a new place, with tons of new people who I could very easily never see again. That’s a powerful boon. I could have come to Montreal for one semester, tried out all kinds of conversations and left, but I ran into two problems. One, I liked the place too much. I wanted to stay another semester, now I want to stay for the summer. I don’t know if I’ll ever want to leave. It is marvelous that I have enjoyed my time here so much that I don’t want to leave, but it does nullify the boon of never having to see anyone here again. And two, I was never really going to follow through with that anyway. It’s a classic story, and it happens over and over again: kid decides he’s going to make a new life for himself in a new place, but he just falls into the same old habits of his past. One cannot easily change one’s personality at the drop of a hat. The long, hard path is much more reliable. So why do I have such trouble talking to people?

I often use the excuse that I don’t know how. It’s a lie, and the lie hurts me. How can I say that I don’t know how to talk to people when I’ve been doing it all my life? I learned how to program in three years but I haven’t learned how to talk to people in twenty? It’s not for lack of knowledge that I have a hard time talking to people, it’s simply fear. Fear of rejection, fear of embarrassment, fear of misunderstanding, fear of ignorance; there is a lot to fear.

I am sitting on the train as I write this. Making the long trip to my home, heading towards English and pizza 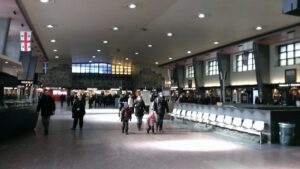 and everything else which brings me comfort, yet I still can’t talk. Last time I made this trip I talked a lot. The person who sat next to me was a professor at Columbia, or so he claimed. He was friendly, if condescending. He thought I was a runaway. Apparently there was a large spat of sixteen year-old runaways that year. He thought I was a statistic. I assured him that I was not running away, that I was actually going home, that I had just been in Montreal visiting friends. I don’t think he ever really believed me. We talked about literature and iPods. When the train pulled into Penn Station, he said goodbye. “Nice talking to you,” I said, “you’re a… You’re a really good conversationalist.” He said nothing.

That moment sticks in my head like a popcorn kernel. Why did I say that? He wasn’t a good conversationalist. He insisted I had run away from home, he didn’t believe me when I corrected him. We talked about normal things, things any two people could talk about. We didn’t connect. Neither of us had any desire to keep in touch. He simply started a conversation. He wasn’t good, he wasn’t bad, he just spoke, and that’s all it took.

The benefits of connecting, even for a fleeting moment, are innumerable. You could meet a new friend, a business contact, a love interest. If the conversation doesn’t work out, then you’re in the same situation you were in before you started it. Actually, it’s better than that. You have new knowledge with which you can approach future conversations. This is knowledge that you wouldn’t have gained had the conversation worked out. For less important conversations, one might gain more from failure than from success! Think about taking some of the bonus time you have and meeting a new person. French, English, it doesn’t matter. There are two-million people in this fair city. Just go out, go somewhere you like, and say “Hi.”

Getting Here, Getting There: Taking The Montreal Metro To Class

Getting Here, Getting There: Taking The Montreal Metro To Class