I love everything about Vermont and the Champlain campus in Burlington. The area is beautiful, there’s so much to do, and my classmates are awesome. By sophomore year I had moved into a nice apartment off-campus with my boyfriend, Nat, who I had met freshman year. Everything was perfect, why change anything?
As sophomore year began, chatter of studying abroad arose. Both Nat and I were asked about our plans, and we were hesitant at first. Studying abroad seemed like such a distant concept, one that would burden us to move back on campus, find someone to sublet our room for the semester, and possibly even part us; I wanted to go in the spring, but Nat wanted to go in the fall. But we remained open-minded. After all, studying abroad isn’t something people typically get the chance to do very often. After attending several meetings, talking with our advisors, and visiting Montreal, we realized what a great opportunity it was and decided to apply for the fall semester, considering we could arrive back in Burlington on time to continue our tradition of snowboarding and skiing at Sugarbush. As for our other concerns, finding someone to sublet was no big deal, people are always looking to sublet in Burlington, and best of all, Nat and I would get to be together!

Sophomore year flew by without much time to think about studying abroad, but as summer progressed, it began to appear at the forefront of our minds. While it was mostly positive thoughts, there was always a tinge of nervousness. Had we made the right choice? What would it be like moving back in to a residence and living with students we didn’t know? Would the experience bring us closer or drive us apart?

Two months into the program I can confidently say we made the right choice. Being here in Montreal has been amazing in so many ways! The city is so alive in a way I’ve never experienced before; there are endless things to do and see, and there is so much art of every medium everywhere – something I appreciate as an artist myself.

The first week we were here, everyone was elated. There are restaurants for miles of every type of food you can imagine from African food to all-you-can-eat sushi, and of course, poutine and smoked meat. There are so many bars (which we can actually go to considering the age of majority is 18) including Randolph, a bar filled with board games where you can order “health,” “manna,” or “stamina” potions that come in beakers. Montreal is a musical and artistic hotspot. In fact, Nat and I immediately booked tickets to a Ratatat concert that was absolutely amazing (you should see them if you can!). It was like we were going on a vacation together, and a planned vacation at that considering the Montreal Staff set up so many fun activities for us to do every week, including a trip to Quebec City for the weekend of September 25th.

Quebec City was amazing! I wasn’t sure what to expect considering Montreal is all I know of Canada, but Quebec was so much more European. The strange thing was that the 3 hour bus ride there felt like we were driving through North Carolina with its flat farmland for miles and a train track that ran along the highway. Suddenly, we crossed a bridge and arrived in a hilly city with castle walls, and narrow, brick-paved roads lined with traditional European-esque buildings. It was a bizarre transition, but a stunning one, none the less! While we were there, we visited the Museum of Civilization, we went on a ghost tour, and we ate some good food. We got to try beavertails, a delicious concoction made with fried dough and candy. We visited some bars, one of which I ordered a bowl of hot chocolate (obviously), and we sat outside with complimentary fuzzy blankets. Most importantly, I bought Tulu, the cutest stuffed seal you will ever see in your life (fun fact: seal in French is phoque, pronounced “fok”, which made it a little less cute but I still love him!). 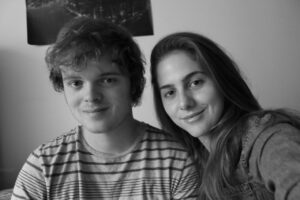 While being here in Montreal has been absolutely amazing thus far, I’ve also had a lot of work, and being in a city, let alone a city that speaks another language first, can be a bit overwhelming. Coming here together has had its challenges at times, considering the workload, but when things are tough and I’m feeling down, Nat’s there for me to calm me down and comfort me, as am I for him when he’s feeling stressed from his internship. And when we’re not too overwhelmed by work, we find time to participate in the activities provided for us, like visiting the beautiful Garden of Light the other week.